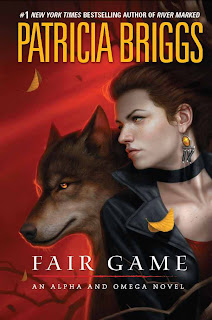 To coincide with the release of Patricia Briggs newest novel, Fair Play:Alpha and Omega, Book 3 on March 6th, along with my review I'll be running a Patricia Briggs trivia contest. The questions will only involve her Mercy series & the Alpha and Omega series since they all take place in the same world.
What's the swag you ask? An autographed copy of On the Prowl where the very first Alpha and Omega novella appeared. Here's how you win and how you increase your chances of winning. The contest is only open to members of this site, the Preternatural Reviews fansite on Facebook and my Twitter account (Preternatural_1). Yes,answer all the trivia correctly and you get your name in the hat once, but tell me where else you're signed up and you get another chance for each site. Make sure you email me where all you're signed up at, preternaturalpaperbacks at gmail dot com
So, mark your calendars. March 6, 2012 at midnight CST is when the questions and review will go live. Best of luck! 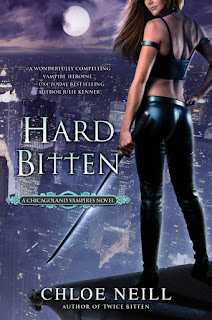 Starting to feel like all your Urban Fantasy is the same and just the names change?  Well, have I got a story for you.  Chloe Neill's latest Chicagoland Vampires story, Hard Bitten.
Things have only been getting more and more difficult for Cadogan House's Sentinel, Merit.  Now she and the Master of Cadogan, Ethan Sullivan have been summoned to the Mayor of Chicago's office.  Apparently, Chicago vampires have been killing humans at 'raves' around town, and the mayor is threatening to set Ethan up to take the fall if those responsible aren't found.  Both Merit and Ethan know that the strongest suspect is Celina, former head of Navarre House, and someone who wants both humans and vampires to be at one another's throats.  Plus, she dislikes Ethan, but hates Merit with a white-hot passion, holding her responsible for her fall from grace.
Ethan dispatches Merit to investigate the raves around town since he is on the hook with the mayor.  Merit goes to a source that Ethan knows nothing about, the Red Guard.  Mostly a 'who watches the watchman' organisation that has been courting Merit, but she needs their contacts if she going to get to the bottom of this.  Finally getting into one of the parties with Red Guard help it seems normal until all hell breaks loose!  Merit makes it out and finds her biggest clue yet, a pill marked with a letter V that seems to have started all the problems at the party.
So begins the roller coaster that is Hard Bitten, and a roller coaster it is.  If there's a playbook (and yes, there generally is) on how to write series novels, Chloe Neill has set fire to it and danced upon the ashes.  Mostly, they run in three book cycles and the third book has a lead-in to the fourth.  That hasn't happen here...at all.  Ms. Neill has consistently become a better, smarter novelist with each book she's published.  Hard Bitten has a smart plot that's tight and keeps you guessing right up until the very end.
I didn't find a lot of fault with Hard Bitten.  I read it in one go, it kept me guessing and the ending was amazing.  Just remember this, when you do get to the ending, on Facebook Chloe Neill asked everyone to do one thing, trust her.  After writing this entertaining of a novel and habitually getting better book after book, I do.

I can't wait until November and Drink Deep - Chicagoland Vampires #5 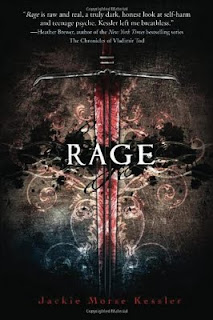 Giving anthropomorphic personifications voice has always been an intriguing concept to me.  I've done my utmost to read the best authors in this select group.  Be it Piers Anthony's Incarnations of Immortality, Neil Gaiman's Endless or the newest addition to this talented club, Jackie Morse Kessler and her Horseman of the Apocalypse.
Missy is a cutter.  Her only kind of release when life gets to be too much is to take a blade across the unmarked parts of her skin and bleed.  Her razor never lets her down.  Has never humiliated her in front of half the school.
She hadn't ever cut that deep before, but this time she had.  That left her with a choice.  Either keep bleeding until her heart stopped or take up the sword that guy who looked like the 90's alt rock star delivered.  Missy was not going to go out a suicide.  No way.  She'd take up the sword.  With one touch Melissa 'Missy' Miller becomes the incarnation of War, and Rage really begins.
Ms. Kessler is someone I admire for sheer audacity.  First she's not going out of her way to make her character lovable.  Hell, she's not even pulling a muscle to make her likable at the beginning of the book.  Secondly, she's taking on the topic of cutting, and she Does Not pull any punches.  Doesn't matter that this is a YA novel there are some scenes in this book that will have you putting it down to go make a sandwich.  You'll come directly back, but you will need a short breather in-between.   To take the journey and discover why Missy does this to herself and what exactly she gets out of it is a long road.  Having Death, Famine and Pestilence around are kind of a blessing and a curse.
You would think becoming an all-powerful Horseman would solve all those pesky problems you had pre-Sword of War, right?  Not so much as it turns out.  Whether you want to believe it or not, War is a necessary function in this world.  Missy has to learn her new function and how it works in harmony with the other three Riders.
Jackie Morse Kessler does not shy away from the hard topics that people need to know about.  You're going to feel Missy's Rage in this book.  Through Ms. Kessler's talented sentences you may even begin to understand why Missy feels the need to do this to herself.  Rage works as a stand-alone or as the second in the Horseman of the Apocalypse series.

I give Rage an Excellent rating of 3.5 Stars out of 4

I want to also say that a portion of this book's proceeds will be going to To Write Love on Her Arms or TWLoHA.  Please stop by their site and buy something or just get educated!

The ratings system is taken directly from Rolling Stone. 4 Stars is Classic, 3 1/2 is Excellent, 3 Stars is Good, 2 Stars are Fair with 1 Star being Poor. All reviews will be mailed to author and publisher, if I have their emails.